Archive of discussions that have went stale. Lots o' dust over here!
Locked
4 posts • Page 1 of 1

Only article i could find on the subject, so far.
http://www.pcgamer.com/this-is-how-bliz ... w-servers/
Australian Tauren Resto Druid.
Primalwow.
Top 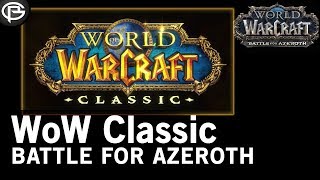 This guy pretty much brings up the things I worry about most.
What if Blizz start making tweaks to try and find a middle ground and inevetebly slide all the way down the slippery slope? Sure as hell they aren't going to take the exact old client, even vanilla private servers have better netcoding than original vanilla. Then they'll add battle.net, fix some bugs, and end up revamping unused spells/talents/specs and whole classes or boss mechanics that were ignored.
The only reason to support vanilla again is because it is a piece of gaming history and they should just leave everything the way it was, for better or worse. But they don't see it as a piece of history, they see it as a PR nightmare.

Vanilla enthusiasts are a minority of the playerbase, Blizz already knows that the feedback will be overwhelmingly negative if they just give access to everyone, whatever path they choose to take. What if the whole thing is just a ruse so in the end they can say "You thought you did, but you didn't."

If it's just going to end with Naxxramas then it's not worth my time.
I will still be afk-playing there without investing too much time, though. Afterall there is a miniscule chance that they are going to continue on to TBC/wrath with enough positive feedback and high demand, now that they have the technical issues under control.
And if it does turn out well, I don't want to start at level 1 while everyone else has a massive headstart (Mmo pressure sucks). Only play there with rested XP, that is my way to victory.

We just don't know enough about what they're going to do with it or even when it's coming out. Primal is still the safest option for me and will be my main server until they announce plans for tbc/wrath (or until they actually make an expansion that isn't one big pile of shit that you pay for monthly, and the first time you buy the game.... and every 2 years for the new and even shittier pile of shit)
Aka Funkelstein
Top

Arcane Intellect never used that much MP - or, at least, not since 1.12.1. Yes, it used a decent chunk, but you could always fire off several before running out of MP. Not "one and done" like this guy claims(I'm having trouble not insulting this person).


be a great deal that they’ve forgotten too, like having to farm fire resistance gear, feed pets, or buy ammunition—little nuisances

When I returned to retail during v5(A.K.A. "Pandas up the Arse") after having been away since 3.0.1, I was irritated by many things. Food and drink were useless, and players were effectively immortal and would never run out of MP. Ammunition wasn't sold anywhere, and I eventually discovered that bows somehow now... manifested their ammunition from the aether? I couldn't feed my pets, so their loyalty was stuck at one place(only to find out later that even that had been removed), and their skills had been massively dumbed down. Talents were outright gone. Poisons didn't exist anymore, and the drawback to using Stealth was gone(the movement speed penalty). There was nowhere to buy reagents for my spells. Trainers no longer trained the character, so skills were all stuck. Many skills that were still very useful were removed to facilitate single-key "play".

Needless to say, I stopped playing before even a full month had passed. I was utterly disgusted at what they had done.

Now I hear them officially calling these things - which gave the world life - "nuisances". A dead world is a far greater nuisance than a semi-realistic "I need to carry arrows" - and, from how dead the servers were in comparison to back in 3.0.1, it seems that at least half of the playerbase agreed. A sad state of affairs, truly, especially considering that many who remained stayed only, in the words of one player, "I'm only here because a few of my friends are still here".

I'll be interested to see where they go with this project, but I'm not holding my breath. After everything that has been said and done, I fully expect that it will be turned into garbage once again.

Users browsing this forum: No registered users and 14 guests